A day in Hobbitton is a great time to talk a little about the illusion that is New Zealand. I mean first off let’s consider the undeniable reality that is forty-odd permanent hobbit holes in a dale in the middle of the North Island of a modern, developed, twenty-first century country. And look, the art department was *astonishingly* detailed: each fencepost was bathed in vinegar to look aged, then painted with a concoction of lichen, moss spores, and glue to give it accurate color and texture. At the Green Dragon Inn there is a real carved green dragon! And the nice tree Bilbo Baggins does his thinking under in the Hobbit is fake but the sixty-years-later one from Lord of the Rings was 100% real until it died from having been transplanted at the irresistable whim of Sir Peter Jackson. So I don’t want to come across as complaining, or trying to diminish it in any way. But superficially the Tourism Board portrays the archipelago as this unspoilt Utopia where kiwi frolic in native vegetation and, don’t worry, the Canterbury Plains have always been pastureland. But it is so interesting because almost nothing is how it was pre-1850, particularly in the lowlands but further west as well. It’s green, no doubt, but what grazing grasses would have been there before the introduction of sheep? Think about all the willows and poplars planted as wind cover for the stock animals. WIllows are from Assyria, for crying out loud, and poplars are 100% European. Those stands of white pine trees? Yeah, not a separate species. They were introduced and have since been killed as part of a back-to-nature campaign, the extent of which they hardly admit to themselves. Um, trout fishing in Lake Rotorua? Nice hobby; English introduction. Deer hunting and venison farming? No less delicious for being an English introduction. So I totally appreciate making the best of things, and making a bad situation your own, but just the *scale* of the changes are so astonishing that it boggles me. Again: is it pretty? Indubitably. Is it massively terraformed? Yeah, kind of. It’s not even almost pristine; it’s somewhere between brainwashing and a revisionist myth. It might have the same motivation as what manifests as compulsion to be hyperbolically unique to the point of absurdity: this building is “the most efficient milk powder production facility on the South Island”, and so on, which originally I had interpreted as a small-country inferiority complex but now I think is just finding facts to relieve the cognitive dissonance.

On the theme of revisionism: maybe you have been paying attention in the world news and maybe you haven’t, but New Zealand is currently undergoing a bit of an internal struggle about whether to change the national flag from a defaced Blue Ensign (Union Jack in the corner & Southern Cross on the field) to something else, maybe a fern or a map or some extra stars. Which is fine and it’s a free nation (*ahem* of the Commonwealth *ahem*) but if they’re going to try and erase their links with the Empire they’re going to need to, at minimum, (a) stop calling their capital city Wellington, ffs, and (b) stop sending all their teenagers to Britain for their gap year. After that do whatever you want. Look, it is great to acknowledge that the forces in your country’s past were not all white and male, that’s cool. But it seems like a big link to break. Anyway, not my business.

We spent our final 24 hours in Auckland, eating Indian food at Raviz near the Sky Tower, walking around the beautiful harbour in the sunny morning light, and eventually making our way up Wellesley Street past Albert Park to the campus of the University of Auckland and the Winter Garden with its Cool House and Tropical House. The thing that depressed me most about Albert Park was the slackliners and the thing I loved most was the butter chicken. We got upgraded to a SkyCouch row on the flight home, returning without incident to celebrate my birthday with saved wedding cake and leftover champagne.

In summary: I misread the itinerary so I brought the wrong guidebook, was a pair of socks short and overpacked my Tshirts, but the whole trip was otherwise A-OK except for a microscopic kerfuffle with the rental car company for the second leg. This is great because it means I still pack like a champion in less than an hour even post-wedding with a pregnant lady sleeping in my bedroom and the rest of the bridesmaids chilling downstairs. I did not see a real kiwi bird, nor did I purchase a jingly kiwi Christmas ornament, but I did get a greenstone necklace. I have what looks like about 700 pictures to whittle down to make these entries, after deleting the backs of people’s heads and the random plastic bags and so on. Overall a great trip, a fun country, a lot to do, a lot to like. Worth a visit.

Rotorua is where the book version of Once Were Warriors is set, but without the film version I wouldn’t have a crush on Temuera Morrison so it’s probably a wash. The lake smells like sulphur as a side effect of all the amazing thermal activity in the area: they have the world’s best Polynesian hot baths (as ranked by Condé Nast), where we chatted with a retired firefighter and a prison psychologist originally from Ventura County and now working for the Department of Corrections in Auckland. The natural hot springs are so alkaline that there is signage to warn bathers about their silver jewelry tarnishing, but I know for a fact that my adornments are from the platinum group metals, thank you (and the Rat is stainless steel; it’s fine).

We spent several great days in the area, visiting Wai-O-Tapu Thermal Wonderland (their own personal Yellowstone) and a morning tubing through the Waitomo glowworm caves. We took daily morning walks along the lake front with the red-billed gulls and the black swans—this is really the town that will have cemented birdsong as one of my multi-sensory memories of the whole trip—and read the Central Otago Times (or the local equivalent) while drinking Earl Grey tea in colonial delight. Jose deeply resents the town for having 24 hour supermarkets when even Boston still doesn’t, and resents the country as a whole for lacking an ozone layer, poor thing. The best bookstore is McLeod’s, 1148 Pukuatua Street, and the best breakfast is the Li’l Miss Bene at the Relish Cafe: a single poached egg on a hash brown with bacon, wilted spinach, and a side of Hollandaise.

One evening we went to the Te Puia cultural experience with hangi dinner, where they taught the women and girls how to spin poi and the men and boys how to dance a haka. We elected a chief to represent us to the warrior offering and perform hongi with the members of the iwi. Dinner was great and cocktails were supporting: gin and taha, where taha is like an indigenous ginger beer. After dinner we had your average run-of-the-mill 35m geyser and story time on large rock terraces warmed by steam, and they sang all both songs that I know from Hayley Westenra: Pokare Kare Ana and Hine O Hine. It also turns out that the master carver on this particular marae carved the Queen K house on Oahu for the Polynesian Cultural Center there, so he was a Big Deal.

Sometimes in the evenings we have a choice on hotel TV of Sky News (all rugby, all the time) and Māori broadcasting networks. Dora says Kia Ora! in Dora Mātātoa, and you can guess most of what SpongeBob Tarau Porowhā is saying even though it doesn’t get any funnier when dubbed. We like the show Lady Who Teaches You Stuff, sort of a panel discussion or quiz show or something where a friendly lady and some teenagers try and practice grammar in the Māori and everyone fails but laughs. It also has the weather, which is more great than it sounds because it has all the indigenous names for places and not “Dunedin”. Finally it has rugby, which is the most Zen-like of the dubbed experiences. The reason it is mindbending is that I understand neither the commentary nor the content and can therefore make very few of my patented clever linguistic inferences. Also one morning there was a heartwarming human interest story about a dual-ethnicity girl of Hawaiian-Māori descent who just won some traditional boat race and was proud to represent her two cultures. Or something.

It’s probably half a day’s drive from Queenstown to Franz Josef glacier on highway 6 via Haast Pass (looks like this) and the impossible rock fall and a traffic jam of dairy cows. It was remarkable to me how mobile they were, jogging like that down the side of the road after the milking tractor, udders swaying. We elected not to take the route through Wanaka due to misinformation from the Visitor Centre about the advisability of snow chains, and somewhere in the few hundred km of two-lane straightaway I learned how to overtake, although never on one of the absolutely *endless* string of one lane bridges. Give way, it says. Go to hell, I says, this trickle doesn’t deserve a name OR a bridge. The soundtrack to our long drive was the wedding playlist, delayed but otherwise as promised. In the city of Franz Josef there is basically one street (“Where is X hotel” “There’s a sign”) and we got our upgrade and reconfirmed our helihike and went to the pub to watch rugby. Again.

In the later afternoon and early morning I read my book (this time “The Miniaturist” by Jessie Burton) on the balcony and listened to all the helicopters in the distance, ferrying tourists from the pads in town to the glaciers above. It’s another example where oversaturated tourism can’t possibly be good for local wildlife, or quite frankly, even humans who care about noise pollution, but let me tell you it is incredible to go up there. The last glacier I was on was advancing to the sea, which is also cool but by definition a bit lower altitude, and glaciers are these dynamic beasts who change hour by hour and only stupid people can only see barren ice. Anyway if you’re going to insist on going up a mountain in a helicopter you may as well go with a professional, and by my count Franz Josef, as a town, probably has more helicopter operators than restaurants, and it *definitely* has more glacier guides than municipal buildings.

To relax after our adventure we had a way-intense American donut the size of two fists and stuffed with boysenberry jam and clotted cream from Picnics, then soaked at the private Glacier Hot Pools for a while and emerged in time for fine dining at the hotel. 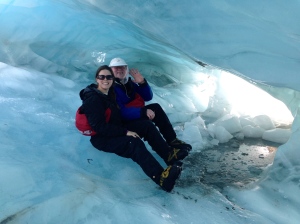 For train day we drove ourselves to Greymouth and provisioned at the supermarket where I learned that they have both beer and yogurt DIY kits on the shelves. The TraNZalpine to Christchurch is crazy scenic and has an outdoor car to take pictures from which is only closed through tunnels.

Canterbury is well on its way to rebuilding after the earthquakes and Christchurch is resilient and is coming back to life through sheer force of will. Our Novotel on Cathedral Square at least exists, unlike the (recently advertised) backpackers hostel that two girls who shared our shuttle from the train station were seeking. We ate dinner at a perfectly adequate intact Mexican restaurant surrounded by rubble and vacant lots, and breakfasted on New Regent Street across from a defunct jeweler and a craft brewery, est. 2014. In an ideal world I would have spent another day there, exploring what is left of the town centre and even using it as a home base to explore Akaroa, the French village just down the coast. Everyone go; spend money there.